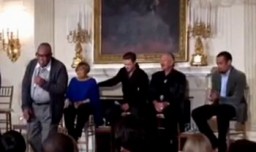 An all-star cast of artists performed at the White House to honor the Memphis Soul music. The concert was hosted by President Obama himself as part of the so called "In Performance at the White House" series, where musical legends and contemporary major artists are invited to perform concerts which are later on shown to American service men, women and civilians at US Department of Defense locations around the globe.

This concert is broadcast on April 16th at 8.00 pm ET on PBS nationwide.