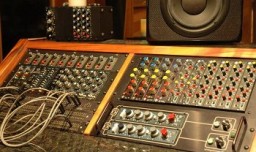 March  20, 2015
Billy Peterson is currently working with Steve Grimes on his new record.

Steve Grimes has built arch top and double sound hole flat top guitars for some of the world´s top players, such as Steve Miller, Leo Kottke, George Benson or Willie Nelson. Grimes is specialized in custom tailoring his guitars to suit the tonal, aesthetic, and playability requirements of his demanding clients.

But Grimes is also a performing artist himself. Besides Billy Peterson on bass, Joe Caro on guitar and Mike Beono on drums are contributing their musical talent to Grimes new record, while engineer Lynn Peterson is in charge of capturing the sound.

Release is scheduled later this year.