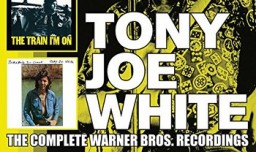 White gained fame especially through his songwriting, as artists such as Dusty Springfield, Brook Benton and Elvis Presley took his songs to the charts. But with his 1969’s “Polk Salad Annie” White also made it to the Top Ten as a performer himself. He has always been a singular performer in his own right with a completely distinctive sound. Today, 71 years old, the Louisiana-born national musical treasure is still going strong.

This 2-CD collection rounds up all three of the classic albums White recorded for Warner Bros. in the early ‘70s plus non-LP singles to create “The Complete Warner Bros. Recordings”.

The 1971 album shifted the focus slightly from the fuzz-drenched swamp rock of White’s Monument recordings to a more introspective style, though “They Caught the Devil and Put Him in Jail in Eudora, Arkansas” and “My Kind of Woman” could blow the doors off any roadhouse south of the Mason-Dixon line. White’s next album, 1972’s The Train I’m On, continued this gentler, more vulnerable style to great effect, with the mighty Muscle Shoals sessioneers in support, Train’s set of songs tackled complex themes of dislocation, alienation and loss with a blend of blues, soul and folk highlighted by some beautiful acoustic guitar work by White and Tippy Armstrong. Then 1973’s Homemade Ice Cream; White’s original version of “For Ol’ Times Sake” is just devastating, and “I Want Love (‘Tween You and Me),” “Taking the Midnight Train” and the title track are every bit as good. Real Gone’s presentation of this essential material features liner notes by Ben Edmonds featuring fresh quotes from Tony Joe White himself.