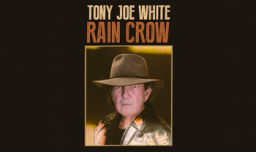 Tony Joe will be touring the United States this summer in support of his upcoming album release Rain Crow.

Rain Crow that is set for release on May 17 is White's first album release since his 2013 collection Hoodoo. One of the songs on this new album is "Hoochie Woman" that is, like the best of his work, steeped in the mythology of the South, particularly his native Louisiana.

The Summer 2016 tour brings him to several US states, such as California, Texas, Arizona, NY, Tennessee, amongst others.
The full list of tour dates can be found at this website (click here)