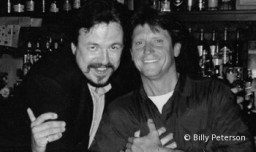 Billy Peterson and David Hazeltine look back to an ongoing musical relationship of 40 years, but NEXT DOOR is going to be their first duo album.

Besides the well chosen jazz covers like “The Boy Next Door” or “Tones for Joan's Bones”, the jazz record includes also two original compositions, “Thanks Jim” and “Cedars Blues” that were written by each of the performers. The highly expected ten-track album was recorded in Minneapolis and is released on the Megabien Music label.

The uncompromising talents of American bass player Billy Peterson have brought him widespread recognition around the globe. Peterson is quite often compared with a chameleon, but not only as he can fill many positions, but also as he is at home in several genres of music weather it be rock, pop, R&B, soul, jazz, folk or country.

American pianist David Hazeltine, who has been playing professional gigs since the age of thirteen, is today considered a major jazz pianist, especially in the New York and Japanese jazz scenes. Hazeltine has successfully forged his own distinctive style and musical voice out of the accumulated greatness and weight of a modern piano tradition.

NEXT DOOR is set for release on June 22nd 2016, the CD release shows are scheduled for 7.00pm and 9.00pm in the Dunsmore Room at the Crooners Lounge & Super Club.