December 15, 2014
Tony Joe White, the Swamp Fox, is a bona fide legend of the music game who has been honing his craft for the best part of 50 years. And it will be on display once again as he is returning to Down Under for an 18 date tour that will see him play shows in Sydney, Melbourne, Coogee, Dee Why, Cronulla, Bulli, Kincumber, Hurlstone Park, Newcastle, Medlow Bath, Devonport and Newport.
Gems like “Polk Salad Annie” or “Rainy Night in Georgia” were just the beginning. Tony Joe´s recording career has now spanned parts of 6 different decades and spawned well over 20 albums with his songs recorded by Elvis Presley, Tina Turner, Ray Charles, Roy Orbison, Dusty Springfield, Tom Jones and Etta James. He has worked in the studio or on stage with list of artists that can make your head spin – Jerry Lee Lewis, Carl Perkins, The MGs, Eric Clapton, JJ Cale, Waylon Jennings, Lucinda Williams, Emmylou Harris, the Foo Fighters to name a few.
Written by Megabien November 5, 2014
On November 6th, Memphis will, once again, be filled with music legends, contemporary up-and-comers and a host of national touring artists who'll descend upon the Bluff City to pay tribute to the 2014 Memphis Music Hall of Fame Honorees. The evening’s festivities will be packed with top-notch musical performances and tributes to honor  this year’s inductees.
One of the highlights of the evening will be a tribute to inductee Ann Peebles performed by Grammy and Rock’n’Roll Hall of Famer Sam Moore, the legendary soul man of Sam & Dave fame. But this is not the only reason for Sam Moore to celebrate; he recently turned 79´s (October 12th). Happy Birthday, Sam.
Written by Megabien 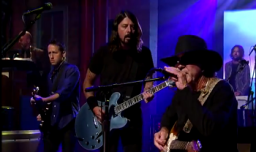 October 30, 2014
Tony Joe White performed with the Foo Fighters on day three of the band´s five-night stand at CBS´ Late Show with David Letterman. On October 15th, Tony Joe White made a guest appearance with the band to play his classic song “Polk Salad Annie.”
The Foo Fighters’ performance was in support of their forthcoming eighth album “Sonic Highways” as well as their HBO documentary series with the same title.  Catch the Nashville episode featuring Tony Joe White airing on Friday, October 31 at 10:00 PM EST / 11:00 PM CST.
“Polk Salad Annie”, which has been picked up by greats like Elvis Presley or Tom Jones, is also among the songs that Tony Joe White performed for Megabien´s Legends Rock TV show.
Watch the Letterman appearance here: Tony Joe White on Letterman.
Written by Megabien September 9, 2014
After his successful Summer Tour across Europe (with performances in England, Ireland, Holland, Germany, France) in support of his recent release "HOODOO", Tony Joe White is hitting the road again this September with several dates in the United States.

The American singer-songwriter and guitarist is best known for his hit "Polk Salad Annie" (also recorded by artists like Elvis Presley or Tom Jones) and for "Rainy Night in Georgia" that he wrote but was first made popular by Brook Benton in 1970. Tony Joe also wrote many big hits for Tina Turner among them "Steamy Windows" and "Undercover Agent for the Blues". August 15, 2014
Sam Moore is returning to Memphis, TN, where once his recording career exploded, to interview with Anthony Mason of the legendary CBS Sunday Morning Show on Sunday, August 17th.

Moore best known for lending his unmistakable lead vocals to the legendary soul duo “Sam & Dave” that came from Miami, FL, but found its fame tied to Memphis´s Stax Records. Moore´s rapid fire call and response influenced by his gospel roots became like a trademark of the duo and can be heard in many of their hits, among them "Hold On, I'm Comin'," "When Something Is Wrong With My Baby," or the legendary song "Soul Man".

Moore is a GRAMMY Award and a multi-Gold Record award-winning recording artist, who has received the coveted NARAS Heroes Award, been inducted into the GRAMMY Hall of Fame, earned the ETAM Living Legend Award, received a Pioneer Award from the Rhythm & Blues Foundation, amongst others. The Rolling Stone magazine named Sam Moore among the Top 100 Greatest Singers of All Time.